The U.S. Department of Transportation through the Pipeline and Hazardous Materials Safety Administration (PHMSA) is primarily responsible for issuing and enforcing the minimum pipeline safety regulations, following direction given by the United States Congress. Pipeline operators are required by the federal regulations to operate and repair pipelines in a safe manner so as to prevent damage to persons or property, but the way in which they do so is generally not spelled out prescriptively. This allows pipeline operators to prioritize pipeline inspections and repairs in areas with higher populations or higher risk factors, but it also makes the regulations ambiguous and challenging to enforce.

The federal pipeline safety laws allow for states to accept the responsibility to regulate, inspect, and enforce safety rules over intrastate pipelines within their borders under an annual certification from PHMSA. If a state receives such intrastate authority they can set regulations that are more stringent than those PHMSA sets as long as the state rules do not conflict with the federal regulations. PHMSA also can enter into an agreement with the state pipeline regulator to carry out inspections on interstate pipelines as well.

Local governments are generally not allowed to create rules to regulate the operational safety of pipelines, though they may have involvement in spill response, some routing and siting issues, and franchise or easement agreements for pipelines crossing government property.

California has authority for intrastate pipelines, which is carried out through the Office of the State Fire Marshal (OSFM) for hazardous liquid pipelines, and through the California Public Utilities Commission (CPUC) for natural gas pipelines.

California has adopted some hazardous liquid and natural gas pipeline regulations that are more stringent than the federal minimum regulations for the intrastate pipelines. All the rules that California adopted as of 2013 that go beyond the federal regulations can be found in this compendium. 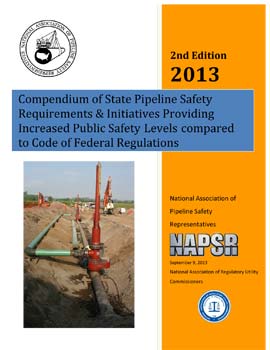 For the most part the federal and state regulations preclude local government from adopting any regulations that require a pipeline operator to take any actions regarding the safe operation of a pipeline. Local governments have the ability to ask for increased safety measures as part of their negotiations regarding the use of public rights-of-way or other public property. One area in which local government has considerable ability to increase pipeline safety is through their land use and zoning authority.

You can find a collection of examples of local ordinance relating to pipelines on the Pipeline Safety Trust website here: http://pstrust.org/trust-initiatives-programs/planning-near-pipelines/planning-ordinances/

More information on regulation of pipelines can be found in the 2015 and 2018 reports.